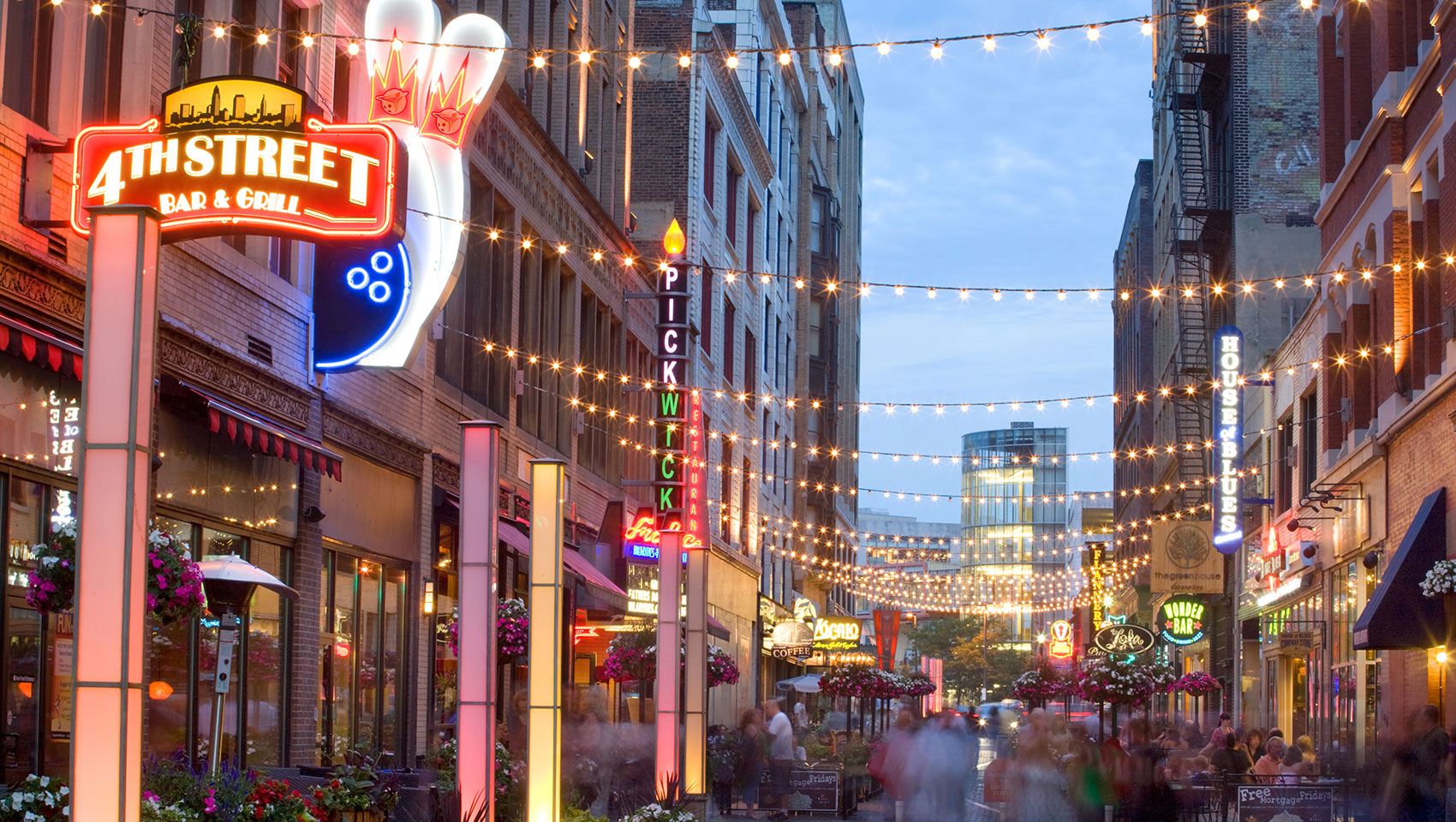 It's all going down Downtown

With so much to love in the heart of the city, we wouldn't fault you for spending your entire time in Cleveland just discovering the amazing and eclectic offerings downtown. You could stroll around the Gateway District, home to some of the city's most popular sports, shopping, entertainment and culinary destinations. You could indulge in some retail therapy with a dose of culture in the Hingetown neighborhood or the Waterloo Arts District. You could even see a show in Playhouse Square or Beachland Ballroom. Obviously we could go on and on, but we'll just recommend you explore below for all the irresistible details.

Music to your ears … and eyes.

Rock & Roll Hall of Fame: Immerse yourself into America's most beloved musical genre with six stories of memorabilia and more. From the Guitar Gallery to the interactive One Hit Wonder exhibit to handwritten drafts of hit singles, you'll be singing the praises of this iconic landmark.

Playhouse Square: As the second-large performing arts center in the country (only New York's is bigger), Playhouse Square hosts more than 1,000 events each year. Sit back and enjoy concerts and comedy, Broadway shows and children's plays, and much more. The theaters are varied, too, including five that are restored to their original 1920s grandeur. While you're here, don't miss the world's largest outdoor chandelier.

Beachland Ballroom: Named for its proximity to an old amusement park called Euclid Beach, the casual and intimate Beachland Ballroom has been around since 1950. Today it welcomes diverse national and local acts like chamber pop outfit Common Deer, indie folk-pop Y La Bamba, rock-and-roll/country-western The Sadies and western swing revival band The Hot Club of Cowtown. Even the weekend brunches are noteworthy.

Butcher and the Brewer: Cheers to pasture-raised meats, farmhouse fare and community seating. The aged beef sliders are raved about, but even vegetarians have options like salt-roasted beets and charred broccolini.

Mabel's BBQ: Michael Symon strikes again, this time with house-smoked meats and sides on paper plates. Not to mention a mile-long list of bourbons.

The Greenhouse Tavern: James Beard Award winner Jonathon Sawyer's innovative talents are on display at this cool gastropub with farm-to-table fare from local growers and purveyors.

Red, The Steakhouse: Just around the corner from East 4th Street, this stylish, upscale steakhouse turns a meal into a luxury experience with delicious steaks, seafood and pastas.

The Corner Alley: A sports bar? Check. A bowling alley with arcade games? You know it. An Americana-inspired menu with an extensive drink selection? You betcha. What we're saying is this place has it all.

House of Blues: Fantastic live music and a menu of tasty Southern-inspired recipes like New Orleans jambalaya and Memphis-style baby back ribs. If you're in town on a Sunday, you might be able to catch the World Famous Gospel Brunch they put on monthly.

Gateway District: We like to think of the Gateway District as something of a downtown MVP neighborhood, and not just because it's home to the Kimpton Schofield Hotel. East 4th Street, Progressive Field and Quicken Loans Arena are all within its borders. Local shopping offers some historical cachet in the architectural landmarks like The Arcade Cleveland and the 5th Street Arcades. Public Square, with its ice skating rink, restaurant, art display, green space and water fountain, is a great place to spend an afternoon year-round. Like we said: An MVP neighborhood.

Hingetown Neighborhood: It's hard to believe this neighborhood — connecting Cleveland's Warehouse District, Ohio City Market District and Gordon Square — was ever neglected and desolate. All the best places have storied pasts, right? Hingetown is now thriving with some of the town's favorite businesses. Coffee, tea and juice shops mix in among outdoor murals, patios, boutiques and walkable streets, while the historic Transformer Station brings contemporary art into the scene.

Waterloo Arts District: Billed as the only corner of Cleveland that is 100% locally owned, Waterloo Arts District mixes authenticity with art and design. Stroll through eclectic galleries, retail spaces, restaurants and bars. The Music for Miles free chamber music concerts became so popular that now they're a monthly occurrence during the season. If you're visiting in summer, don't miss the district's annual art festival, featuring local bands, local artwork and local food trucks.

Fans of professional football, baseball and basketball can cheer to their hearts' content in Cleveland. Stadiums for the Browns, Indians and Cavaliers are all located downtown.

International Women's Air & Space Museum: Amelia Earhart and Sally Ride aren't the only high-flying ladies. This free museum celebrates many of the “silent” women who contributed to the advancement of aviation.

Terminal Tower: From the top of this ornate skyscraper you can see up to 30 miles. The tower lights up in various colors according to the occasion. In fact, you can place your color request by tweeting @TowerLightsCLE.